What to Do When Your RV Sink Smells Like Sewage

In this installment of RV Mishaps, we learn what to do when that unpleasant smell isn’t coming from your wastewater tanks, but from your sink.

There are many reasons why your RV could smell like sewage, and none of them are pleasant. It’s one of the unfavorable aspects of RV living, and something most RV owners will have to deal with at some point. Usually, smells are related to your RV’s black tank, which is why we were confused to have a horrible stench coming from our kitchen sink.

Only a few weeks after our fridge’s fuse was fried from a power outage, my husband and I started noticing a nasty septic smell when walking past the RV kitchen. Since our bathroom is on the other side of the RV, we weren’t sure of the cause. The smell worsened, especially after we emptied our tanks. We tried doing nothing and hoped the smell would go away on its own, but—spoiler—it didn’t.

We initially thought that maybe the roof A/C unit was sucking in septic fumes and blowing them into the kitchen. But the smell was there even when we weren’t using the A/C. We then started to worry that there was a leak in the septic, or that our black and gray tanks were mixing.

We tried to remedy the issue by adding a tank treatment to the gray tank by pouring it down the kitchen sink. Maybe something was growing in the pipes and the culture would help break down whatever funk was thriving. This helped a bit, but we could tell something was still off.

We confirmed that there wasn’t a leak in the septic outside the RV, and after examining the pipes inside, we realized that the smell was the worst directly under the kitchen sink. After a bit of searching under the sink cabinet with a flashlight (while holding our breath) we discovered—nothing. No signs of leaks, just a disgusting smell.

So we turned to the internet for help. Hours of internet forum research helped us rule out all sorts of possibilities, and we concluded that our problem was with the anti-siphon trap vent device under the kitchen sink. Ours was so old that the spring mechanism that keeps the seal in place after venting was worn out. This meant that the seal was leaking all the nasty smelling gray tank fumes into our RV.

The good news: Anti-siphon trap vent devices (or ASTVDs) are fairly easy to replace, and inexpensive. The bad news: We couldn’t find one. The part was sold out everywhere and even local mobile RV mechanics didn’t have it. So we were stuck with the smell until we could track down the part. Two states and three stores later, we were finally able to find a correctly-sized ASTVD.

The ASTVD cost about $6, and we also needed to purchase a channel lock to remove the old one. When we first tried to remove the faulty ASTVD, we realized that a vacuum had been created when we emptied the tanks, making the part screw itself onto the thread very tightly. After multiple frustrating attempts to unscrew the part without breaking the rest of the plastic plumbing, we finally decided to buy the right tools to make the repair possible. It wasn’t until we used a channel lock that we were able to unscrew the original part. Once we had the proper tools, it only took about 30 seconds to remove the old ASTVD and thread the new one into place. And sure enough, no more stinky sink.

If you have an older rig, keep an eye on parts that are wearing out. We didn’t do anything specific to break the sink’s ASTVD, it was simply an older part that wore out through normal use. So regularly checking up on older parts in your RV is important.

We also learned that it’s important to be familiar with your rig. Our lack of familiarity with our RV’s plumbing system meant that it took us hours of research to even know where to look for a problem. If we’d been more familiar with our RV, we could have diagnosed the problem quicker. Turns out, it’s a pretty common issue and RV forums gave us the ultimate solution to our stinky sink problem.

After 6 years, you can safely assume that a $6 plastic seal with a cheap metal spring mechanism will need to be replaced, especially after regular use. Had we taken the time to research this before leaving, we could have replaced the part out of caution before hitting the road. Preventive maintenance can minimize problems when you’re traveling. 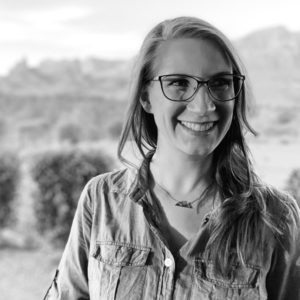 Sarah is an Arizona-based freelance travel writer who specializes in food, wine, and RV trips. She loves hitting the road and looking for amazing meals, wineries of all kinds, and quirky historical activities. What to Do When Your RV Air Conditioner Stops Working What to Do When You Hydroplane in Your RV What to Do When Your Bathroom Smells Like Sewage